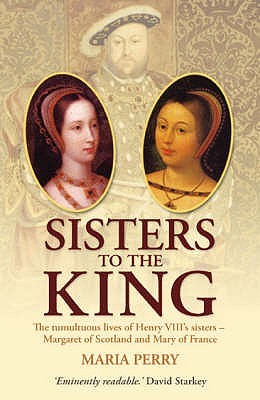 There’s no secret on this blog that I enjoy Tudor history. This is one of those books that I found at a bookstore and snatched it up, then never got to. So, I put it on my Top Ten list for 2019. And, I read it!

It wasn’t a bad book, although it is on the lower side of the 3.5 that I gave it.

First, the book spends far too much time talking about people other than Mary and Margaret. There are chapters where they are not in the picture. Such as, their childhood. Unsurprisingly, records weren’t really kept about the king’s daughters before they were of marriageable age. Horrible, sure. But, it’s just the truth of the matter. There was also a whole chapter spent talking about Katherine of Aragon being married into the family, which was largely pointless because Margaret and Mary weren’t really a part of that conversation.

It just got tiring of reading about information that didn’t deal with the subjects of the book. Sure, the events impacted them, but I was more interested in knowing how it did and their reactions to it. Most of it wasn’t new information for me, so that made it even more boring for me.

Second, there was a dearth of information about Mary Tudor. The most information that was there in the book was her very short marriage to Louis XII, the French king. For that time, there was a lot of information because everyone cared about her and her status as a woman. After he died and the debacle over her second marriage ended, she mainly vanished from the record. Reading it, I honestly can’t remember there being anything about the birth of her children. She stayed away from court, mainly because of her brother’s affair with Anne Boleyn. Or, that’s what Perry makes it seem like. But, there was just nothing.

The real star of this book was Margaret. She married James IV at a young age and had a few children, including the future James V. Then, James IV died and she was suddenly created regent, which men didn’t like. And then she married a guy that they hated (much like her granddaughter, Mary Queen of Scots) and had a daughter from him. The marriage dissolved. She had an affair and lived with the other man.

I mean, she was seriously fascinating to read about. I ate up the information about her because most of it was new. I’ve read a book about her daughter, Margaret Douglas (mother of Henry Stuart, Lord Darnley, who married Mary Queen of Scots and fathered James I of England), but it was light on information about her mother.

After reading this and with the cons it had, I’m definitely going to search out for specific biographies about the women. I know there’s one out there about Mary, but I’m going to have to search more for one that has Margaret as its subject.

Have you read this? What did you think?
What historical figures do you want to read more about?

2 thoughts on “Book review – Sisters to the King: The Tumultuous Lives of Henry VIII’s Sisters – Margaret of Scotland and Mary of France by Maria Perry”