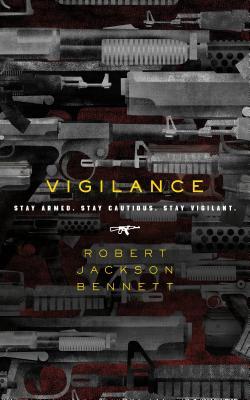 I received this ARC from Tor in exchange for an honest review!

My updates for this book looked a little like this:

The last one was my ending thoughts on the book, so that says a lot, right? This book was a force of violence. It shocked me and had my heart pounding. I mean, I read most of it in one of my classes (granted, said class is boring but I can’t always concentrate on reading when someone’s talking) and was absolutely set on it. Even more telling is that I had to read this on my computer — which I hate doing — but I didn’t really care about that.

But, this book is a terrifying glimpse into the possible future of America.

The heart of the matter was that, from the beginning, America had always been a nation of fear.

It plays on a future that doesn’t feel that far off, where there were 500 mass shootings in a year and, one day, someone videoed themselves doing it. Advertisers were shocked when their algorithm picked it up and started playing that as the ad. Then people watched it. Millions of people.

Thus, the Vigilance was born. It’s a “game” where they select people who could become active shooters, then set them loose in a public place to see what happens. It’s like football, complete with commentators talking about how inept people are. The game is to keep people ever ready for the inevitable shooter and allowing shooters to just do what they want, with the promise of a prize at the end.

The story itself follows two people. McDean is a man on the inside, running the Vigilance. He carefully crafts and selects his Ideal Person that will be the best shooter to reach the audience they’re going for. And, he’s also having sex with an intern. Then, there’s Delyna, a bartender who’s father was a police officer killed. She’s not into the Vigilance and just wants the whole damn thing to stop.

I think the thing that was the most frightening about this story was just how real it felt. Bennett captured all the people involved and made it feel so real. It was like I was watching the shooting, because there are graphic descriptions of it throughout the last half of the book. I was really placed in that situation and it was chilling.

The reason I took the star off was due to two reasons: the turn the story took at the end and the lack of a resoluation. I love novellas, but not all of them are created equally. Bennett really knows his craft and how to get all the needed details in without going overboard, but I still think that some things were added that simply didn’t work for the overall tone of the story. And, I really wanted some kind of ending, no matter how negative it was.

Still, this is an excellent book. If you can handle the subject matter — and, I know, not everyone can because it truly is life imitating art — I highly recommend it.