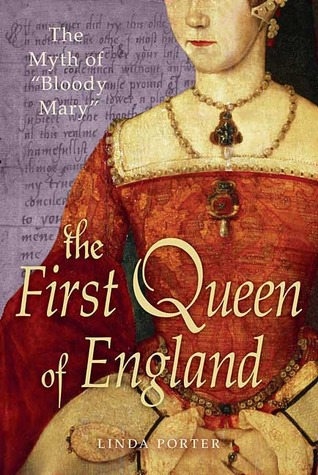 Another awkward review of a book I put in my top ten of this year. Whoops. Apparently I can’t choose them well?

The title really drew me in. I wanted to see how Porter would refute all the things that are attributed to Queen Mary I. But, she couldn’t deny them. She accepted that they happened, but put them in the context of Mary’s beliefs and the times, along with kind of looking at how her father was.

This book was too long for the topic by a whole lot. It didn’t help that Porter didn’t focus on the subject matter for most of it.

Over 200 pages of this book set the stage, yet they really revolve around telling me about what other people did/said. So, her mother, her father, Anne Boleyn, the birth of her brother, the series of wives following Anne, etc. It didn’t even focus on the friendships she had, which was a shame since she was close with two of her father’s wives, Anne of Cleves (who actually converted to Catholicism) and Katherine Parr.

Basically, I didn’t learn anything about Mary as a person — which I think would have gone towards dispelling the “Bloody Mary” myth. It glossed over humanizing her. To me, you have to come into this book already having a sympathetic look towards Mary (which I do) and already know some about her life (again, I do).

So, I wouldn’t suggest it to beginners. Even when Mary starts ruling, the book awkwardly glances its focus around to other people and things. I can honestly say that I learned nothing new about Mary through this book that I had known from previous books where her reign was discussed or even TV shows.

In other words, I just can’t picture myself recommending this book to anyone because I know there’s a wealth of information about her. The book just didn’t draw upon it for some reason and I can’t understand why not. I loved reading little snippets of things she wrote. Why not capitalize on it?

I’m out a book on Mary I, sadly, and I’m going to have to scour to find something to fill it.

Do you have a maligned historical figure you like?