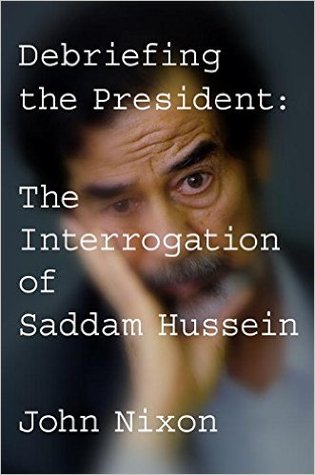 Yet another book that I’m reading about a time that I don’t remember. When someone says Saddam Hussein, I know that he’s connected somehow to terrorism. And that’s about it. Couldn’t tell you who he was, what he did, or what he was involved with exactly. Just that he is somehow involved with terrorism.

And this book has two main focuses. First, about who Saddam was. And he’s not really the man that you think he is. It’s hard to describe since Nixon really assumes you have opinions about him in this book (which is highly redacted thanks to the publishing board he had to put it through since it was full of classified information), but since I didn’t, I really had no clue. What I can tell you was that I didn’t enjoy this focus as much.

What I enjoyed was the second focus, which was on the Bush administration’s failures. There were misunderstandings about the situation. Bush’s want for black and white answers when every single one of them was in a shade of grey (and I’m sure there were more than fifty of him). Nixon takes a huge issue with Saddam’s execution since America, in a way, just let it happen.

And, last but one that really affects us today, is the fall-out of removing Saddam based on pure ignorance of the situation and the good that Saddam was doing. With him in power, he kept some of the radicals out, as Nixon portrayed it. Perhaps that’s not completely correct, but I can see the line of reasoning. Without Saddam, they flooded a collapsing governmental system that didn’t have someone like Saddam in power and didn’t have America helping out.

Either way, I’d suggest this book more to someone with the background of Saddam’s portrayal in the media. Since I wasn’t really interested in the news at age seven, it was out of my consciousness. Someone who was around for it would probably find this more interesting.

One thought on “Debriefing the President: The Interrogation of Saddam Hussein by John Nixon”