Goodbye November, hello December! The last month of the year and, just like all the others, we think that this one will fly past us as well. We want to wish everyone some happy holidays! Whether that’s Christmas, Kwannza, Hanukkah, the Winter Solstice, or just spending time with your family, we hope that you have good and safe times. (But we’ll also probably wish specific holidays as they come up.)

Today is/was the last day of the survey. By the time you read this, the link will be closed down and you won’t be able to take it. Thank you to everyone who took it! We appreciate it. But, if you forgot or ran out of time, never fear! Feel free to click that contact button to email us books you’d like to see us read in 2018.

Dr. Stephenson turned away from the bed where the dying man lay breathing so lightly the blanket over his thin chest barely stirred. His bony, restless fingers plucking at the edge of the wool were the only signs of life and awareness. Twice the young woman sitting on the bed beside him had tried to still them, covering them with her own, but her father’s hand picked up the silent tattoo again, like a drummer remembering his place, as soon as she released it. He had already frayed an inch of the binding. She gave up and sat back, sighing.

This book is one that I’m not terribly excited to read. Why, you might ask? It’s the fifth book of a, currently, 20 book long series. And a series that hasn’t thrilled me. But, I keep going back to it. I guess I’m fitting the definition of insanity with this book choice, which is…

WATCHERS OF TIME BY CHARLES TODD 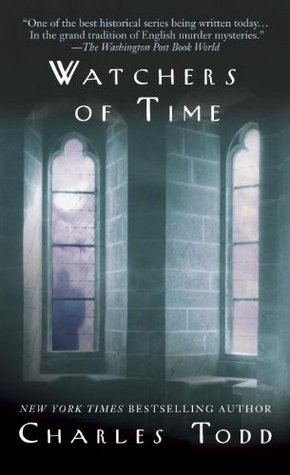 The biggest draws to this series are the writing and the uniqueness of this series. So, the writing is beautifully haunting and nostalgic. Then, Ian Rutledge, the main character, is a veteran of World War I who has the diagnosis of shell shock (which we now would call PTSD) and hears the voice of a fellow soldier who died during the war.

Sadly, though, I do find this series a bit dull at times. And the books, from what I remember, bleed together. Yet, it’s usually a series I pick up once a year to read a book or two of since I generally like it.

She waits until we’re driving over the bridge to tell me. This is a strategic move. Wait until your temperamental daughter is suspended over the Atlantic Ocean to drop the bomb, thereby decreasing the chance that she’ll fling open the car door and hurl herself over the edge.

My mother is many things. Beautiful. Annoyingly affectionate after a few drinks and mean as a starving snake after several. Quick-witted and hilarious when her latest boyfriend isn’t turning her into some sycophantic sorority girl. But a fool?

My mother is no fool.

This is a 2017 release that I have taken far too long to start reading. I literally just checked it out on Overdrive from my library. I don’t even know if I will get to it in the three weeks I have it, but I will try. It’s important to me that I try and read more because it’s a nice way to unwind after work but requires more energy than I usually have. Which is none.

This week I have chosen…

How To Make a Wish by Ashley Herring Blake

It is my goal to talk about as many LGBTQIA+ books and I think I’m doing a pretty good job. I also thing f/f romance books are important as well as they can be overlooked. I think I’ve done well at that too. This book also deals with a young woman’s relationship with her mother. Even though I am close to my mother, we have been through a lot together. There is good and bad, but that’s what happens when you live with someone for 25 years. I’m very interested in this book and I hope to get to it soon.