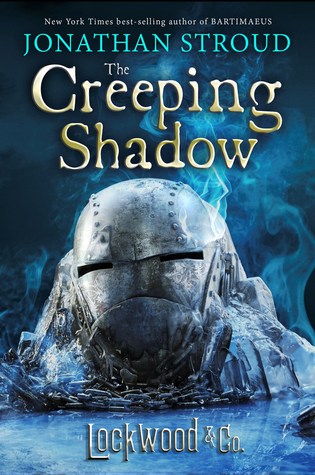 Reviews for book one, two, and three.

And, we’re back. This book picks up after the end of the last book and is the second to last book in this series. There’s a lot of ground it has to cover, along with makeup for the disappointment book three was. Luckily, this was a whole lot better.

Lucy has largely gotten over herself from the last book. She’s done some soul-searching (no pun intended) and is reunited with her gang. The bane of her existence from the last book, aka Holly – who reminds me of me, isn’t around too much. Lucy’s really realized that 1) Lockwood isn’t interested in Holly and 2) Holly isn’t interested in Lockwood. Time apart did wonders. They still get annoyed by one another just because their personalities are so different, but Lockwood drama is done.

On the other hand, Lucy is with Lockwood a lot. They really work together as a team throughout the various adventures this plot takes us. This book really took time developing their relationship. Lucewood? Lucwood? Locky? I don’t know ship names. Either way, they’re a really good team.

Yet, the plot was really disjointed. It starts with a cannibal ghost, then goes with some drama about the Skull, then a haunted village, then the bigger plot that’s been brewing in the background for the last few books. It just didn’t feel like they all connected together, but really one led into the other and somehow it all worked. Each plot was fantastic on its own, but I really wanted more payoff of them being combined and then some earth-shattering realization when they actually are all the same issue. With this, they sort of were the same issue, but it didn’t make me do this:

The cliffhanger for this was fascinating. Apparently, I did read this one last year but I didn’t remember a thing from it. Maybe a tiny bit of the beginning, but that was it. I’m really excited to see how the big payoff is presented in light of the cliffhanger.

2 thoughts on “The Creeping Shadow by Jonathan Stroud”