Another Friday. It feels like these keep coming faster and faster, don’t they? Or, they do for us. Either way, you all are treated to another First Lines Friday!

Caidyn will be in his everlasting blue. Any typos he has is because of his hurt finger.

Chantel will be in royal purple because I’m kween.

To me, it’s Halloween. The moment it hits September 1st, it’s officially Halloween. I know, I know. But, Caidyn, what do you consider October? That’s Halloween, too. Halloween goes from September 1st to October 31st. Everything else is classified, in my mind, as Not Halloween. Or my birthday.

That’s insane. I already knew I was insane. I’ll add your birthday in there, I guess.

Wait, where was I going with this? Oh yeah.

I basically start reading *~spooky~* books the moment I can. This is one of them that I’m going to get into again this month.

Of the first few hauntings I investigated with Lockwood & Co. I intend to say little, in part to protect the identity of the victims, in part because of the gruesome nature of the incidents, but mainly because, in a variety of ingenious ways, we succeeded in messing them all up. There, I’ve admitted it! Not a single one of those early cases ended as neatly as we’d have wished. Yes, the Mortlake Horror was driven out, but only as far as Richmond Park, where even now it stalks by night among the silent trees. Yes, both the Gray Specter of Aldgate and the entity known as the Clattering Bones were destroyed, but not before several further (and I now think unnecessary) deaths. And as for the creeping shadow that haunted young Mrs. Andrews, to the imperilment of her sanity and her hemline, wherever she may continue to wander this world, poor thing, there it follows too. So it was not exactly an unblemished record that we took with us, Lockwood and I, when we walked up the path to 62 Sheen Road on that misty autumn afternoon and briskly rang the bell.

So, there we go. Not the creepiest openings, but it’s a pretty damn good book. Book series. And the series title is given in the snippet I gave. So… what is it? Is it a bird? Is it a plane? No, it’s…

THE SCREAMING STAIRCASE BY JONATHAN STROUD 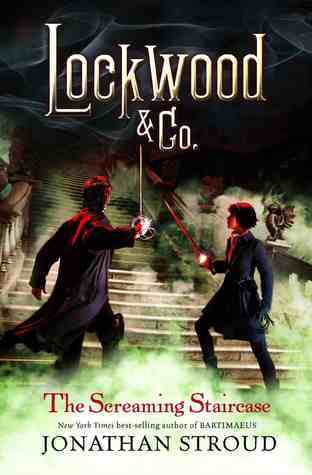 This series is set in an alternate universe where ghosts have overrun the world and can kill you if they touch you. Only kids can see them and it’s up to them. There are many different organizations and Lockwood & Co. isn’t the top, but they’re good.

This series has a bit of everything and is heavy on sarcasm, which is why I like it. Even more excitingly, I’m doing a buddy read of this with Chloe! She’s great, so I suggest you checking her out if you aren’t already friends with her. Super excited to finally be rereading this series, especially in preparation for the new book.

Adam would have to get the flowers himself.

His mom had enough to do, she said; she needed them this morning, pretty much right now if the day wasn’t going to be a total loss; and in the end, Adam’s attendance at this little “get-together” with his friends tonight may or may not hinge on his willingness/success in picking up the flowers and doing so without complaint.

This book is a 2017 release that comes out on Tuesday and I picked this for First Lines Friday to encourage everyone to go read it because honestly, I haven’t disliked a book by this author yet.

And this week’s winner is…

On September 19th, the new Patrick Ness book hits American shores and stores. Now, this book came out in the UK in May, and I got a copy from Book Depository, read and reviewed it already. The link is right here. It wasn’t just because I was impatient about reading the new Patrick Ness book, part of it was that, but honestly, the US cover is terrible. I’ve ranted about this already, and if you are curious feel free to Google but I won’t put the image here. Normally, I don’t get that invested in US vs. UK covers, but what the hell were they thinking with the change? It doesn’t ultimately matter because I have the superior copy, but clearly it still gets under my skin. The “superior” copy. Elitist much?

However, I would encourage everyone to read this book because it’s the story of Adam, a gay teenager who lives in a small town with religious parents. . The book takes place in one day of his life and so many things happen, but it’s just one day. Tomorrow might be better or might be worse. We don’t know because it’s just one day in his life. It is a bit angsty so Caidyn will hate it, but I love reading about queer characters and it felt unique while also feeling universal. It does sound like a book I wouldn’t like that much. I want more stories like this one told. It’s not as good as A Monster Calls or More Than This, but I enjoyed it.

Plus the references to Mrs. Dalloway and Virginia Woolf really got me.