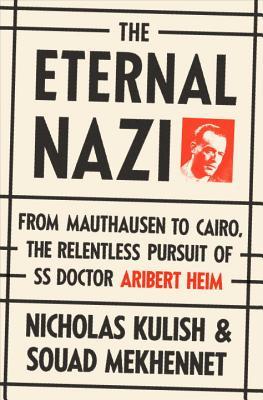 So, the only reason I read this was because of I Was Told to Come Alone by Souad Mekhennet. In that book, she had a huge chapter about Cairo, which was where she got arrested by the Egyptian police and was confined for ages. Like, that was probably one of the most worrying parts of that book… which says a lot since Mekhennet went and interviewed jihadis and went into their camps.

This book was the reason why she got arrested. Egypt thought she was trying to make them look bad for harboring Nazi fugitives when she was just trying to expose the truth. Sadly, I just didn’t find it as good as I had wanted to. I kept spacing out while I listened to it. So, suddenly, all of these German names make no sense and why are we talking about Islam and who is this illegitimate daughter.

The focus is just so off for me. It had a great potential for me, too. While I do like reading nonfiction about the actual atrocities committed by Nazi Germany in order to learn about what humans are capable of, I also like reading about people hunting for them. My problem with this book was that it jumped around so much. Sometimes the book was actually about Aribert, sometimes it was about the main investigator, sometimes it was about Aribert’s family. The topic of the book was all over the place, making it hard for me to pay attention.

When I did pay attention, it was really interesting and I could jump back in with only a little bit lost on me pretty easily. Both authors were good writers, but it was just that I had an issue paying attention and knowing what to pay attention to. Feel free to blame it on me listening to audiobooks at work on a stressful day when I’m definitely going to pay very little attention to the audiobook.

One thought on “The Eternal Nazi: From Mauthausen to Cairo, the Relentless Pursuit of SS Doctor Aribert Heim by Nicholas Kulish and Souad Mekhennet”