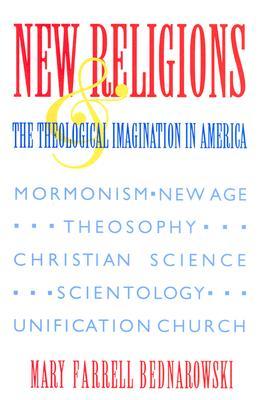 You’re probably wondering: “Caidyn, why are you reading this?”

Well, let me tell you. It’s called summer classes. This was one of my assigned textbooks for a class. I had to read this in six days, or a chapter per day. Fun, right?

Bednarowski’s book covers six different religions, which you can see on the cover. She pairs each of the religions together, one that has older roots in America and the other that’s newer. Mormonism is paired with Unification Church. Christian Science with Scientology. Theosophy with New Age. It’s all very logically done, too. Mormons and Unificationists put a focus on the physical world; Christian Science and Scientology focus on the spiritual world or a world beyond us; Theosophy and New Age look to blend the physical and the spiritual worlds together.

I came into this with a passing knowledge of three of the six religions. I’ve heard at least something about Mormonism, Scientology, and New Age. The religion I was actually brought up in is a part of New Thought, which is an outgrowth of New Age (and, therefore, Theosophy). The other ones, I knew nothing about.

As I said, this book is very logical. Besides the introduction and epilogue, there are four chapters that topic different topics in each of these religions. God, humanity, death, and ethical considerations. It’s broken down into those pairs, then compared as a whole to see the common themes in the six religions, even if they have very different ways of expressing it.

One of my biggest problems is how it was structured. I love the pairings, but I think it would have been smarter to structure it not by themes but by the religions. One chapter on Mormonism, one on Scientology, one on Theosophy, etc. It was hard to keep track of all the information when I was simply trying to keep the key concepts of the religions straight since they delved into topics I was unsure on.

However, I learned a whole hell of a lot and it was extremely readable for an academic book. (Bednarowski kept calling the book “this study”, and it didn’t really read like a typical academic work.) If you have an interest in any of these religions or new religious movements from America, I’d recommend it.