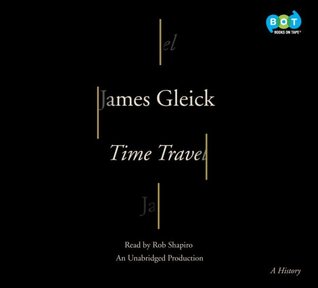 This little book covers a lot of territory. And not through time travel, sadly.

What it does cover is almost everything under the sun to do with time travel. It starts off by examining literature, then takes a step back to talk about the history leading up to when time travel is a concept coined by H.G. Wells. Then, it goes back to reviewing all of the literature, the changes and so on. Philosophy gets brought up. Science and how it differs from science fiction to the point where scientists say it’s possible while authors say it’s not really a thing. Television and other media.

This book literally covers so much ground and does it so well. Each topic is logically examined by Gleick and each thing that feels like a tangent adds back in and really matters. It’s very impressive and I’m glad that I listened to it.

At times, it got a bit too long for me and too winding. As I said, there was a lot of territory covered, so that means there’s a lot of information. It got too much at times. I could space out and feel like a simultaneously missed nothing and everything. I think that it would have worked better if it was organized into concepts. Such as, a section on science and then one on philosophy and then the bulk on literature. I think it would have been better to cover history, then science, then philosophy, and finally literature. That’s what makes the most logical sense to me.

However, the way it weaved everything together also worked. It made me have to pay attention at times, or I was going to miss the importance of why this was being explained.